Share a memory
Obituary & Services
Tribute Wall
Read more about the life story of Frank and share your memories in the Tribute Book.

He was born November 19, 1934, in Elizabeth, New Jersey, the son of Millard and Cedona (Cordonnier) McLain.

He married Marilyn Hansen on April 5, 1959, in Bellevue, Ohio, and together they raised two daughters, Allison (Tom) Craft of New Bremen and Elaine (Perry) Walker of Saint Marys.

He was preceded in death by his parents; his siblings Bill McLain; by his brothers-in-law Charles Hansen, Howard Hansen, Cecil Hansen, Arthur Hansen; by his sister-in-law, Pauline Joseph.

Frank was a graduate of Chaminade High School in Dayton. He attended the University of Dayton for two years, then served 4 years in the US Navy. He served at Great Lakes Naval Base, Green Cove Springs, Florida; St. Albans, New York and aboard the USS Ranger, of which he was a proud plank owner. He was a hospital corpsman in the Navy. After he was discharged from the Navy he went to The Ohio State University and graduated with a degree in pharmacy.

He started his career as a pharmacist at Marion General Hospital and later moved to Saint Marys where he worked for many years at Neely’s Drug Store. He later retired from Rite-Aid Pharmacy. He was happy being a pharmacist for more than 30 years.

Frank was always quick with a joke or a tongue twister. Some of his doctors didn’t appreciate his sense of humor, but the nurses did!

He loved the OSU Buckeyes and had attended their football games for more than 50 years. He enjoyed music and was always very supportive of his family’s activities. He also loved  traveling, watching NASCAR, and cheering on  the Bengals and the Browns.

Friends may call from 11:00 A.M. til 2:00 P.M. Friday at the funeral home, where memorial donations may be given to the American Diabetes Foundation, the American Heart Association or the Kidney Foundation.
Condolences may be sent to Frank’s family via Millerfuneralhomes.net 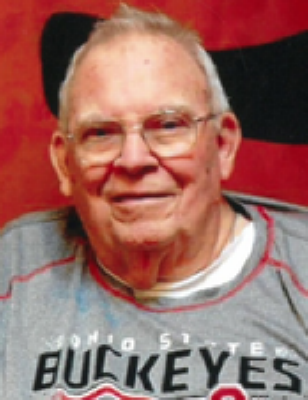